Hey, guys! I realized it's time for a new bog post, and not just because most of you new visitors from MoCCA will be routed here from my business cards because I was silly and used my blog's url and not my new site's. WHOOPS. With the Thesis deadline crunch I didn't have time to make new cards in addition to eight hand-bound books, and screenprinted covers for Rockall Part I reprints, AND facetrim a pile of Part Is and Part IIs for MoCCA. I'm still baffled at how much I got done just last week! At least ROCKALL (the webcomic) has been updating regularly! Tuesdays and Thursdays!

So, Thesis! It's all put together and handed in, and now I have no idea what to do with myself since I have free time again. I slept a lot today; it was awesome.

About eight days ago, I was finishing up the digital files of my cleaned up artwork and plugging them into the InDesign file. Exactly a week ago, this is what my project looked like: 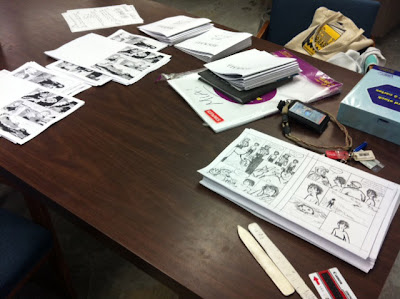 Then I separated out all of the signatures, cut the endpapers down to size, poked holes in all of them, and sewed them together with my Hulk Hands. All eight books took me an entire day, because I kept snapping the thread on accident when trying to pull it tight. They don't call me Amelia "Rips Doors Off Hinges" Onorato for nothing, folks. That has actually happened. Twice.

But early last Wednesday morning, I was looking at these beautiful babies! The spines are cardstock, doubled on itself and glued directly to the book-binding cloth, which in turn is glued directly into the sewn-together signatures. 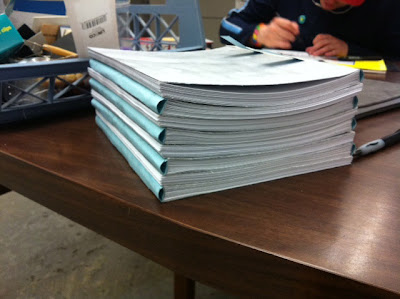 So much glue, you guys.

Then I took a nap.

THEN, I cut down 12 pieces of faux-microsuede and got nine viable screenprints of the cover design out of them! I didn't take a picture of either that step or the ensuing steps of gluing together the bookboards and guts, because I was operating on autopilot at that point, but of the books themselves I've got pictures a-plenty! 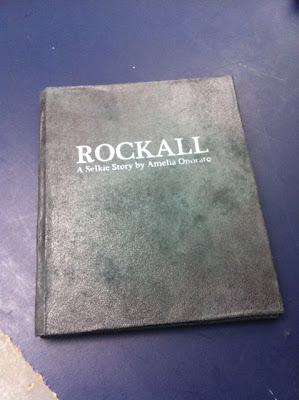 It looks so much better than the dummy, haha--and that was a version that won me a cut of the April Fog Memorial Scholarship! 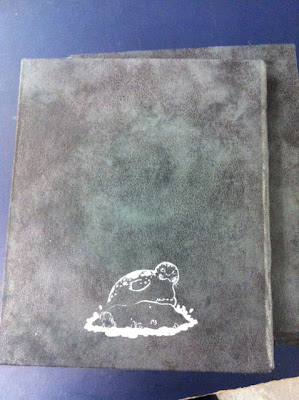 Plus there's a sweet little chubby-chubs hiding out on the back! EEE! 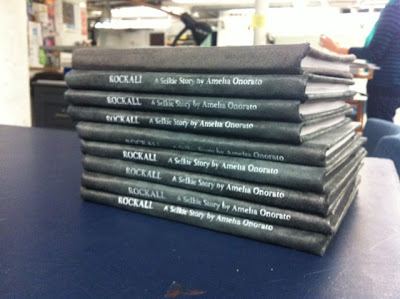 SPINES! Dummy copy is on top.

Then I sewed them all into their little knit pouches while watching Hellraiser: Hellseeker (staring the Allstate Mayhem Guy and Liz Lemon's ex?! YES, PLEASE), and lined them all up for one last group photo. Although we had to make eight copies, we only had to hand in six to the Thesis Committee; we can keep one for ourselves and send the other to our Thesis Adviser. And, since all the patterns are unique, and I'd been working on them for so long, they all felt like their own little personalities. 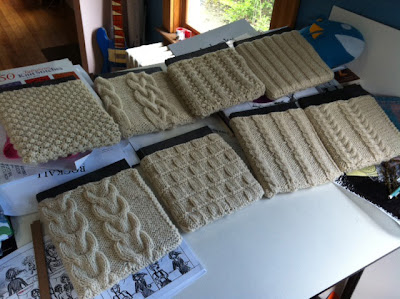 What should have been a moment of triumph turned into a version of Sophie's Choice, albeit with somewhat fewer Nazis. 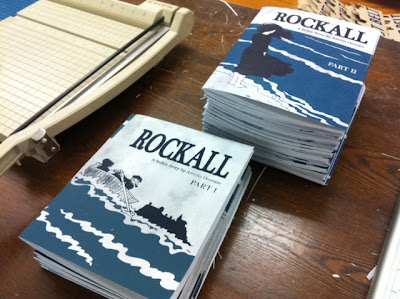 --Thesis projects were handed in-- 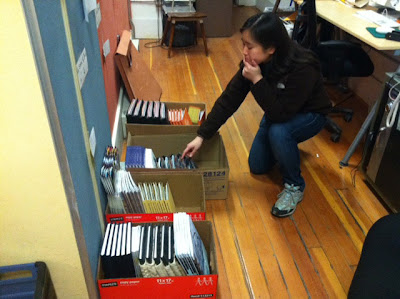 --and Donna, Melanie Gillman, Billage, his wife Sarah, and myself drove down to New York, where we met up with my friends Amy and Chris (citation_needed, tl-dr), crashed in my aunt's apartment, and went to MoCCA! 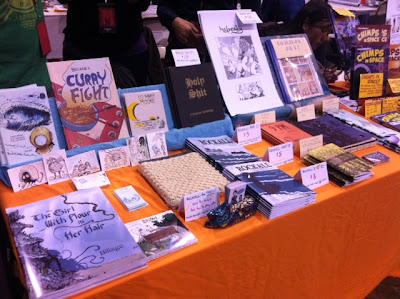 Our table was the best! And the only one with an orange tablecloth. That was really a sheet. Which Donna and I found for $1.26.

I made back my table cost and made some pretty sweet trades, and I got to hang out with a bunch of friends I haven't seen in a while! HUGE SUCCESS!

I also got to try Bubble Tea for the first time! 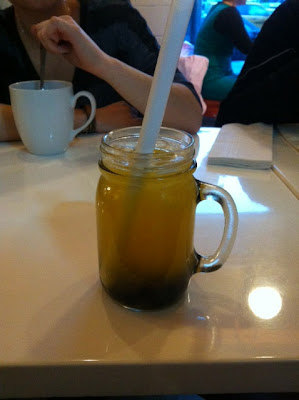 The tea itself was good; still not a fan of tapioca.

I also got to see Cabin in the Woods on Saturday night, which may be the best $13 I've spent in a long time. Don't listen to the critics--the ending is PERFECT.
Posted by Amelia Onorato at 1:17:00 AM