we have come to a crossroads

...wherein the contents of my sketches and the progress of the comic are at odds with each other. I have uploaded all of the sketches I've made so far for this chapter (I plan to make more, but later stuff is more complicated and needs more ironing out. Bleh), and most of what I have lying around won't make any sense because I love drawing Theano (who hasn't been introduced yet), and there are spoilers galore, and I like leaving my readers mildly bewildered. At least for now.

So. For the moment, even though it's old and 50% of the watchers of this blog have already seen it (sorry about that), have a picture of Jane Bird, protagonist of the upcoming Prologue and later member of the Wunderkammer staff: 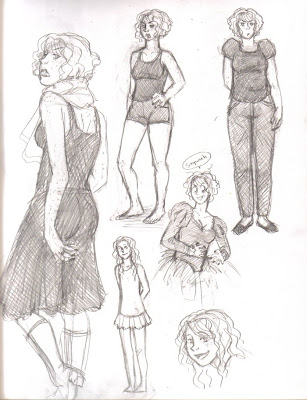 It's a really bad scan; my $2 sketchbook from Ocean State Job Lot is crazy dimensions, and my scanner hates it with a passion. You guys have been spoiled with the quality of my past posts--because all of my old scans looked like this I've been doing newer sketches on computer paper, which scans so cleeeeeeeanly. It also helps that computer paper doesn't rip or smudge when I erase D: But it's a $2 sketchbook! I guess you get what you pay for...

Jane hails from Hoboken, New Jersey, so she says things like "smawll" (much to my, if no one else's, amusement); and comes from Irish and English stock. Although she has her father's last name, she was named after her maternal great-great-grandmother, who was also named Jane Bird (her mother thought it was funny).

Although Jane was born in 1986, making her a year older than myself, she is only 19 throughout the majority of the story since she joins the Wunderkammer in 2005. Don't be mislead into thinking that the fact the "present day" portion of the story takes place a few years ago is due to some mysterious and masterful planning on my part to tie in with a story about time-travel: I just really wanted to draw a character wearing gaucho pants and they were in style in 2005 (read: I bought a pair in 2005, and the fact that I even knew they existed is a testament to their prevalence at that time). Speaking of gauchos, whatever happened to those, huh? They're so comfy. I don't care if they're not fashionable anymore, I still wear mine. On laundry day.

Original sketches of Jane (the ones posted here are her "official" character page) depicted her with a busty, but relatively thin, physique. Then it occured to me that pretty much all of the people in this story were turning out with similar body types, and Jane was one of the ones to change accordingly. Although her hair, face, clothing and cynical personality remained the same, she's slowly becoming pudgier and pudgier, haha. It's stalled out at about a size 10/12, or average American female judging by how hard it is to find clothes in that size when I go shopping.

This was drawn back in January, when I first started my figure drawing class! So all the proportions are wonky and terrible :B I promise, promise, promise to work on some new, more relavent sketches for Kristina and Amschel and the weird things they encounter in upcoming scenes. Mostly because it would be a good idea for me to have those fleshed out before going any further with the story. LULZ.
Posted by Amelia Onorato at 10:30:00 PM No comments:

don't be neglectin' the gerkins!

What you have missed:
Anyway, what you're really here for! 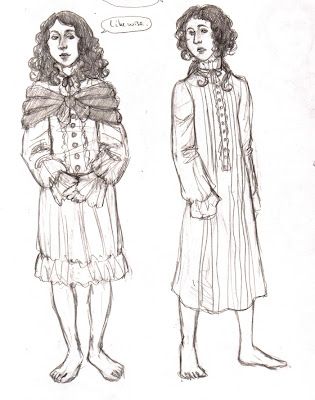 So this was my original concept art for Amschel and Kristina. I researched their nightshirts and EVERYTHING. But, you say, they look nothing like they appear in the comic! THAT would be because I didn't refer to this when I started--from memory--and didn't realize there was a discrepancy until about ten pages in. WHOOPS. Whatever, I can incorporate things in later scenes, and I kind of like the way their faces have evolved in the final version. And it's good that they aren't the same height anymore.

GIVIN' THE CHARACTERS CHARACTER!
yaaaaaaaay
Posted by Amelia Onorato at 10:04:00 PM No comments: