Have some Mysterious-Swedish-Time-Traveler beating up a stupid German/French kid: 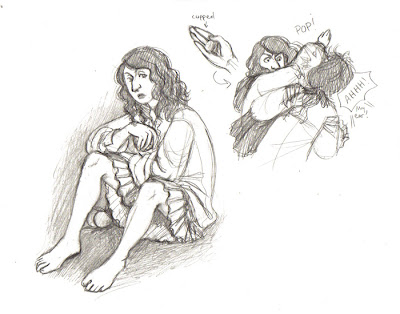 Well, the title is exaggerating. But only just. The last time I made a serious organization attempt of the teetering pile of loose-leaf paper littering my bedroom, there were no less than 37 individual concepts. Mostly terrible. And that was four years ago! Since then I must have come up with an additional seven...teen? JKLOLOLOL.

The Concept: three mythical creatures (a Merrow, a Kelpie, and a Selkie), out of luck with today's housing market, have to share a tiny tide pool. Either that, or they're suckered into a Timeshare con; except the Kelpie would probably eat the con artist and that would be the end of that. 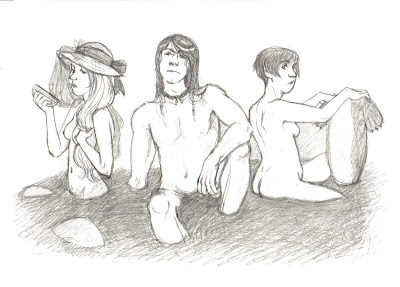 I...just really like water-based magical creatures D: Originally I only thought of the Kelpie and Selkie (middle and right), but I messed up the composition and there was waaaay too much negative space on the left that needed to be filled. Before I went with a Merrow, she was going to be a Nix, simply because of their danger towards pregnant women and unbaptised children on Midsummer's Night, Christmas Eve, and Thursdays. Why Thursdays?! All Thursdays, or only some? And why on the Solstice and Christmas Eve, but not New Year's or Halloween? But Nix are Germanic mythos, while Kelpies and Selkies are Celtic, so it seemed best to follow suit.

Our protagonists, left to right:

the Merrow: Merrows are the Celtic version of mermaids; they have green hair and webbed fingers and must wear a special hat called a cohuleen druith in order to return to their underwater homes, but for the life of me I could not find a reference so I improvised. The veil made sense at the time...because she could use it to make an air bubble? Sure. Merrows like to comb their hair and sing and lead young men to their rather enjoyable dooms under the waves where they will live forever in an enchanted state. We shall call her Lurline, because it means "alluring temptress." But that's a silly name so she prefers to be called Lura.

the Kelpie: Kelpies are mean! I had been under the impression that they always looks like pretty ponies, luring small children to ride on their backs so they can drown and eat them, but apparently they can also assume human shape! Crazy! Generally the purpose of that is to lure young ladies into riding on their backs so they can drown and eat them, and they can be captured and turned into hardworking fieldhorses, but after seven years it'll eat the master's right pinky and left leg and run away. Only once was there a nice Kelpie, and even then that was only because he didn't go to Tir na nOg with his friends and instead fell in love with a clever human girl and chose to forget his mystical origin to become human. So in the end he wasn't really a Kelpie. Their manes/hair is always dripping, and they're cold to the touch. This one is named Lunn.

the Selkie: one of my favorite mythical creatures! Selkies are seals who can take off their fur like a coat, and then hang out sunbathing. Usually when they show up in stories it's because some dude sees a bunch of them on the rocks and steals one of their furs, because without it she can't go home. So all of her friends ditch her and she is blackmailed into marrying the guy, they have kids, she mopes around the shallows, until one day one of the kids asks her what Dad's oiling and it turns out to be the fur! So she takes it and runs back home, leaving her husband and kids behind. Although sometimes she comes back to play with them. Sometimes, the Selkie is happily married, and will try to save her husband if he gets lost at sea, but she won't be able to return to human form if she does. So this is Nuala, because she has bare shoulders (duh); since Selkies are seals and Harbor Seals are the best kind of seal, that's her "true" form, and that explains why she's curvier compared to her roommates.

I hope you have enjoyed this lesson in Celtic Mythology!
Also, T&A.
Posted by Amelia Onorato at 11:52:00 PM No comments:

Well, look how fancy this is! Except for the poorly photoshopped banner, that is; but I don't have the patience to make something that's exactly 700 pixels wide. Hence, the inclusion of a fresco on the outside of a church on a cliff in Rocamador, France (famous for the sword Roland threw halfway across the country from Blaye, stuck in the mountain to this day)! Problem solved.

I decided I wanted a sketchblog a while ago, but livejournal is out of the question because I have too many emo high school memories associated with that site (also, I'm too stupid to figure out how to do cuts; I feel like that matters less here?). Besides, I like my sketches too much to exile them to the graveyard of forgotten and broken dreams that is my deviantArt scraps page, and I can't figure out how to nicely upload them to the Wunderkammer webcomic without detracting from the story so, ugh. UGH! Fie on you, technology!

Anyway, the whole point of this: 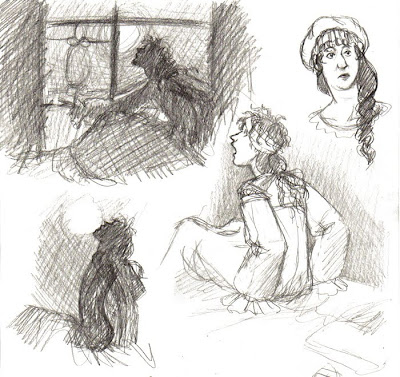 Brainstorming for upcoming pages! I, uh, have decided not to go with the bottom-left one; it's a little too oracle-from-300 for my tastes D: Silhouettes and dynamic action frames have never been my strong suits. Practice!

i enjoy talking to mysellllllf
Posted by Amelia Onorato at 9:14:00 PM No comments: