You know, I often feel like my line art looks much better before I color it; which is always a bummer after spending hours laboriously coloring each and every orange or dome detail, and WOW THEY LOOK DIFFERENT NOW .v. Continuity fail.

Lately, though, I've been making panels that compositionally I am very pleased with, but then have to cover up with speech bubbles. Life is so hard, that this is the worst thing I can up up with to complain about, haha! But seriously, this close-up of page 44 actually proves that I took an anatomy class--lookit them joints! 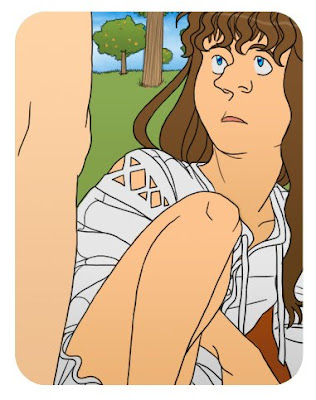 ...actually, this picture is kind of obscene out of context, haha. But it illustrates another problem, that I will sometimes breeze over important details (like the fact that Kristina is wearing clothes) if I know they'll be covered by a great swatch of white covered in words :\ Something to work on.

BUT I STILL REALLY LIKE THIS FRAME DD:
Posted by Amelia Onorato at 11:19:00 PM No comments:

Because My Life Is So Terribly Interesting (?!)

Actually, my life has actually been pretty interesting lately! Often this is not the case; it's difficult to write about my archiving career and make it interesting and appealing to "normal people." I mean, do you really want to hear about how the price of bronze casting has increased exponentially over the past six decades, based on invoices? Because...I could go on for days :\

Two weeks ago, I went (briefly!) to MoCCA! Really, I was in NY to visit 1/3 of the Regis College Museum Studies Department (Hi, April!), and I convinced her it would be fun times to check it out! And it was :D She was very patient while I ran around saying "hi" to everyone I knew (and still I missed a bunch of people from my new school AND Kate Beaton. WRYYYYYYYY T^T); she even bought a book for herself! So that was exciting, but we had to leave early to attend a 50th Anniversary Antiquarian Book Fair :OOOO So it was hard to be too bummed.

Imagine, if you will, a big-ass room. A big-ass room full of old, leather-bound books and the smell of vellum. Also, April's boyfriend's friend worked for one of the businesses represented, and snuck us in. And THEN! He snuck away from his post and took us on a tour of all the booths, and just started opening glass cases to show us, and let us touch, things! Things like a second-edition EVER printing of the Koran, and first-editions of The Hobbit and, weirdly, A Clockwork Orange. I don't much understand the allure of that particular piece of work. And it is certainly a piece of work :\ Other things of note were hysterical Age of Exploration Era maps, where South America is sideways, and a Geography Game about the Departments of France apparently written by a resident of Loire because that county was this game's equivalent of "Boardwalk." Jesus. Everyone knows that Gironde is better!

Then we went to a candy store that must have taken up an entire city block!
Yessssssss.

Also that weekend, I visited a family friend's art studio in Harlem, along with my aunt. He's a second-year Master's student at Columbia, and just finished his senior thesis: it is a clock, rolling on the track of a treadmill. I'm not going to lie; my understanding of contemporary art is negligible at best. I think it's an allegory about time v. the rat race, but I felt too stupid to actually come out and ask DD: Either way, I can appreciate the work and physics that went into engineering a rig to keep the clock from rolling off, yet rolling smoothly in place (magnets and pendulums!). Sorry, Sam .v.

Then all last week at work I was conscripted from the archives to help put together the Senior Art Show; so instead of being home working on Wunderkammer, I was running around yelling at students to give me their information and working reception on Opening Night. But it was totally worth it; below are two of my favorite pieces (please excuse the bad quality of my camera phone): 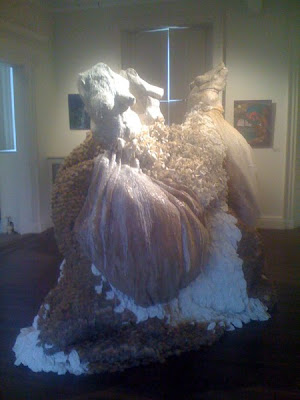 This...really reminds me of the Silent Hill nurses, only going to Prom! 8D
They are made out of papier-mache, used tea bags, and wax. 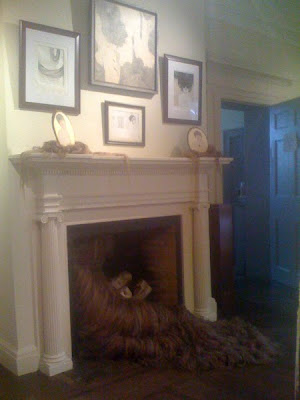 It's like a bad fairy tale! It doesn't help that I've been re-reading all of Angela Carter's weirdo, bestiality-themed reinterpretations of famous fairy tales, haha. I have to walk past this fireplace several times per day, and every time I get freaked out.

Last weekend a bunch of old friends were in town, and were treated to the grand, Home Town Tour (whether they liked it or not, haha!). And yesterday I went to the dentist and had a cavity filled without Novocaine, because I am a total badass.

That is a lie. I am such a baby; the cavity was so small it hadn't gotten past the enamel, so no pain-killer was necessary. I cried anyway T^T

This volcano is really taking away from the allure of going to France next week. Well, maybe going to France. I dislike flying at the best of times, let alone when there's an increased chance of a painful, fiery death. Eyjafjallajokull, why you gotta do me like that?
Posted by Amelia Onorato at 8:19:00 PM 1 comment:

Uh, hi. I haven't updated this in so long I feel like I should be reintroducing myself, haha! So hello, Internet! Nice to meet you!

Certain exciting things have been happening in my life since we last spoke. My internship was extended again, all the way to the end of May! I turned 23! My cousin got engaged, and asked me to be a bridesmaid; she and her fiance are starting up a frozen yogurt company in Northampton, MA and they've asked me to help design their logo! Airlines started charging exorbitant amounts for carry-on luggage!

Oh, and I got accepted into the Master's Degree Program at The Center for Cartoon Studies!!!
So it's official: I'm going to have a terribly eclectic collection of college diplomas, none of which guarantee a life of financial stability. My father weeps.

Since it has been such a long time since I've posted anything on this blog, I've decided to upload the entirety of my application comic; flooding you with images as compensation for five months of silence, haha! That, and I've had hardly any time to draw anything else .v. Sorry.
Those of you following Wunderkammer may recognize page four; again, sorry.

The application required at least two pages starring myself, the ocean, a robot, a piece of fruit, and a snowman, although how we chose to combine those elements was entirely up to us! Fun fact: as a History geek, EVERYTHING I DO IS CONDEMNED TO TURN INTO A HISTORICAL ANECDOTE.
Also, thar be some salty language ahead! Be ye warned! 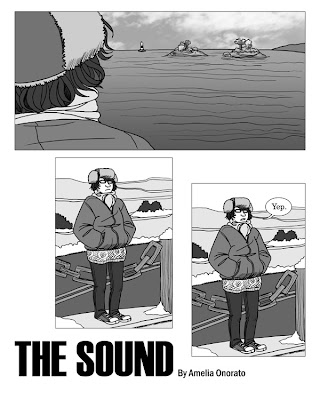 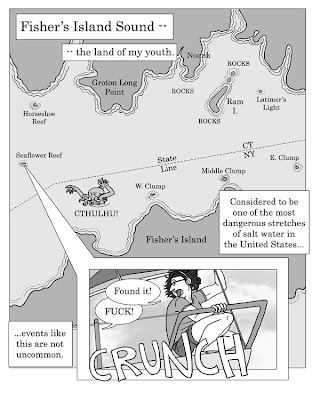 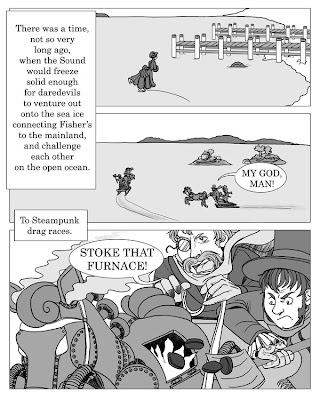 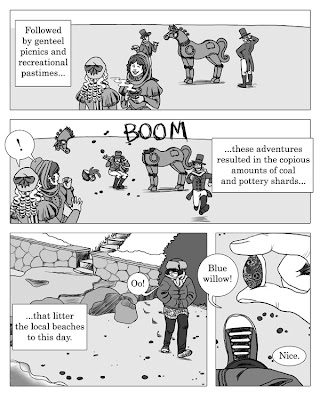 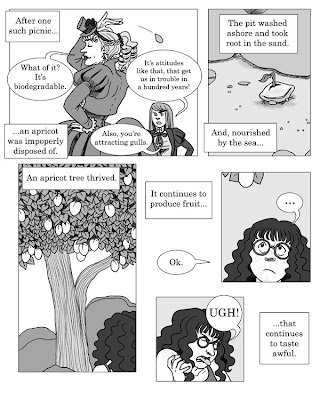 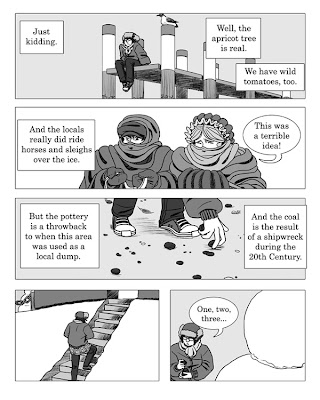 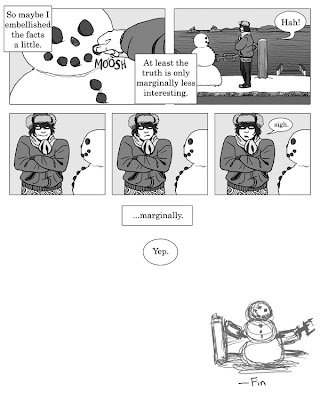 This comic co-stars the oldest wooden-chain-link fence in Connecticut! Or maybe New England. That factoid is a little hazy in my mind; I heard it, in passing, on a sailboat in October of Seventh Grade, and I totally wasn't paying attention because the popular, cute kid was trying to chat me up for my spare sweater. No, Steven; you should have come prepared. I DON'T CARE HOW IMMACULATELY GELLED AND SPIKED YOUR HAIR IS.

But I can assure you that the fence is still there, and only about 100 feet from the house in which I grew up. Ah, nostalgia.
Posted by Amelia Onorato at 6:38:00 PM 1 comment: