Ladies and Gentlemen, welcome to the first installment of the Wunderkammer Tour. There are about 150+ rooms in the entire museum, so this is going to take a long time; in the same way that Stephen Colbert has covered about 50 of all the state districts in the five or so years he's had his own show. But I digress.

Today is a special day; we're visiting two rooms! First, the Greco-Roman Sculpture Garden. This room is located at the center of the building, and--as you can easily see--spans all three floors (excluding staff quarters; those are on the fourth floor). The idea for a central courtyard came from the Isabella Stewart Gardner Museum in my old haunting ground, Boston. In the Wunderkammer, the first floor (arcade?) consists of doors framed by Doric columns and capped with traditional triangular pediments copied from actual architectural features Bastian and Edmund obtained in Greek and Rome. Second floor is basically a balcony with a Greek-inspired banister, and the third floor is similar except for Ionic columns and overgrown planters. Also, fun villa roofs! 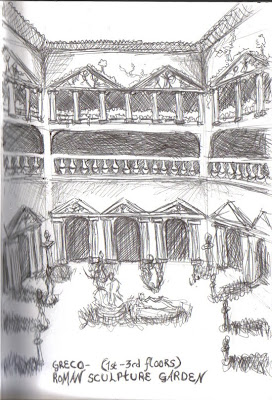 Now we'll jump up to the 3rd floor, to the Common Room (Staff Lounge, whichever you prefer). All of these sketches are freehand and in pen, which is why there are certain glaring errors in each and every one, like how the ceiling details...don't...quite...line up correctly :\ Essentially the Common Room is just a glorified sitting room (of which there are several others), but it's the one most conveniently located between everyone's suites. Strange how things like that are unofficially decided. Edmund is responsible for this decor, with all of his Victorian sensibilities; you'll probably notice a lot more of that style of arm chair scattered around this, and pretty much all others of my stories, since I like to draw them and can actually pull them off convincingly 9 times out of 10. 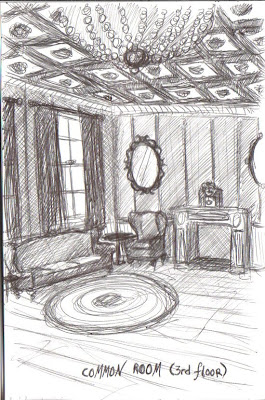 Until next time, then!
Posted by Amelia Onorato at 8:58:00 PM No comments: