What? Something that has nothing to do with Wunderkammer?! 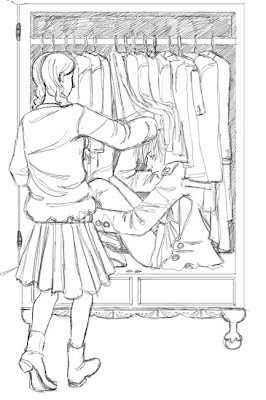 You may have noticed a lack of activity on this blog lately; I've been an irresponsible webcomic author and spending all of my free time lately making a Halloween costume (pictures to follow after a dramatic debut this weekend--I WANT IT TO BE A SURPRISE EVEN THOUGH EVERYONE KNOWS I AM GOING AS DR. GIRLFRIEND) instead of making sketches for your enjoyment. And today, when I finally do draw something it's fan art of The Magic Toyshop, one of the weirdest books I've read in a looooong time. I don't get to read much anymore, since I have no down time ): Fie on being an adult, I say!

The Magic Toyshop, in a nutshell, is a coming-of-age story about 15 year old Melanie, who kills her parents by cavorting through the English countryside at midnight wearing her mother's wedding dress, then shredding the hell out of it climbing an apple tree since she locked herself out like a genius. It gets better. OH, BUT DOES IT GET BETTER. Now an orphan, she and her superfluous younger siblings are sent to London to live with their maternal uncle Phillip Flowers, his wife Margaret, and Margaret's brothers (making them Melanie's uncle-in-laws?) Francie and Finn. They are filthy; their home is a dark hole in the wall of a toy store with no hot water AND EVEN LESS JOY (at least when Phillip the crazed puppet enthusiast is around), and I totally thought this was set in olden times until Finn was wearing a grubby t-shirt and grimy jeans. When Phillip isn't around, it's party time. Or Finn-Macking-on-Melanie-by-a-Broken-Statue-of-Queen-Victoria time, followed by voyeurism! Yay! Did I mention he's technically her uncle, and nineteen?

THEN Phillip decides it would be awesome to put Melanie in his life-size puppet show to be raped by a giant swan on stage (it's art! And a Greek myth!), so he tells Finn to rehearse with her but Finn is all, I AIN'T A PART OF THIS SYSTEM, ALTHOUGH I REALLY DO WANT TO BONE YOU, hides in his brother's wardrobe, and lights up (see illustration). Melanie is all fascinated by his funky stank at this point and is like, CLICHED PHRASES I READ IN A MAGAZINE THAT ONE TIME, and Finn glares derisively out of his sea-blue eyes! Meanwhile, Finn's been trying to get Phillip to murder him so the puppetmaster will be sent to prison and Margaret can be free to talk and dance and wear pants, so he murders the swan after the show in a drunken fit of jealous and pent-up rage. Then he and Melanie spoon.

Wow, this is more than a nutshell. Anyway. Everyone takes a bath, and Finn gets a haircut and Melanie isn't sure how she feels about this new, clean stranger. Phillip comes home to crash the party and set the house on fire when it turns out that Margie and Francie like to get it on on the kitchen floor. Wait, what? So Finn and Melanie escape by breaking into the abandoned jewelry store next door and Francie goes off to break some cuckold-despot-husband kneecaps with an iron pipe. Ha.

The novel ends ambiguously with Finn and Melanie watching the place burn, like Wednesday's boy toy when they torch Camp Chippewa in The Addam's Family Values. It's implied that they'll stay together and punch out many babies (Spoiler: Finn is Irish. Also, apparently he plans to name their first child "Proximity." ...what?), but will Melanie still expect an idyllic romance when Finn continuously fails to deliver in any sort of non-creepy capacity? Will Finn continue his newfound friendship with showers and soap? Will Melanie ever see her younger siblings again (wait, she had siblings?)?!

More importantly, what the fuck just happened? And why did I like it enough to make fanart? (Answer: the scene where Finn smokes in and refuses to get out of the closet is amusing).

This was fun and cathartic! Maybe I'll spice up this blog with more summaries of various media in between sketch posts. Speaking of which, I found this amazing thing over the weekend: The Hunt for the Worst Movie of All Time. Hi-fucking-larious! I hope someone makes this book into a movie for that man to destroy.
Posted by Amelia Onorato at 7:55:00 PM No comments:

This post will make a lot more sense after this Friday's update (when Amschel will finish introducing himself to his time-traveling tour guide), but what the hell; amirite? New sketches are fun for everyone.

Some of you may be familiar with the name "Rothschild;" they're a banking dynasty in France and hold the rank of "Baron" (there are also branches in Italy, England and Austria). Before the late 1700s, however, the family owned a coin shop in Frankfurt am Main, Germany, and lived in the Judengasse--or, Jewish ghetto.

Mayer Amschel Rothschild (1744--1812) actually existed, and was the launching point of the successful family still prominent in European economics to this day (his oldest son, Amschel, took over the Frankfurt bank; second son Salomon went to Vienna; third son Nathan was sent to London; and youngest son Jacob/James ended up in Paris). Mayer was the fourth of eight siblings, but I've been unable to find any solid information about them so I just made up all of their names and dates of birth! Fun. Stuff. So as it ended up, our Amschel is five years younger than his more famous brother (I sometimes like to pretend that my historically fictitious characters really existed :\).

Have some visual stimulation: 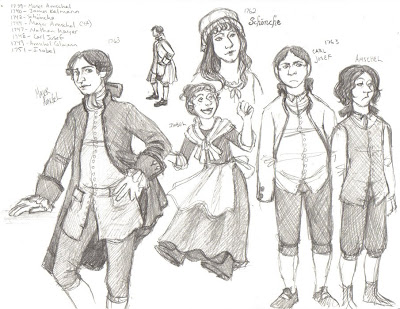 I realized after the fact that Mayer looks disconcertingly like Luther Levy from a certain period graphic novel I am following online, but to help me sleep at night I've decided to gloss over that fact by pointing out that he doesn't appear often and there are only so many accurate ways to portray a German Jew during the 1760's D: Needless to say, I do not sleep very well.

This sketch is all sorts of wonky since it was more about defining faces and historically accurate clothing; for example, Amschel in this picture is about eighteen months older than he currently appears in the comic, but looks about 10 instead of, oh, 14/15. That's just because I ran out of paper and wanted to get his entire wardrobe in D: That's right, folks! Next chapter will feature actual clothing, not just nightgowns! How excitiiiiiiiiiing.

You may have noticed that only five of the eight siblings are pictured here; both parents died in a smallpox epidemic in the mid-1750s. I will leave the fates of Moses, James, and Nathan open to your interpretations. Maybe they're just grown up and living lives of their own. Either way, they don't factor into the story and I have so many tangents thrown in there to begin with that I don't think the fragile organization of this chapter could handle such non-plotline exposition.

But I digress. To sum up: Amschel is German, and fluent in both that language and Hebrew (he speaks French at Mayer's insistence, since at that time French was internationally recognized as the language of court, and the who's-who of Europe were all able to communicate in it). He is the seventh of eight children, and gets picked on by Carl (who is as friendly as he looks, and does have hands despite what this picture would suggest). He plans to be Mayer's apprentice, and despite being a total airhead when it comes to common sense, is actually surprisingly adept at math.

Between the comic, my job, and making a halfway decent Dr. Girlfriend costume for Halloween, I have no time to do anything! Also I've forgotten how to draw on paper. An eraser has nothing on Ctrl-Z. I abuse that tool like no one's business.

So have some (as yet unintroduced) twins! 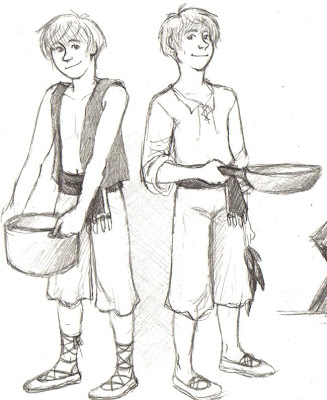 Hector-Hernan and Bartolome Criston are 13 year old brothers, born in Saint-Jean-Pied-de-Port sometime in the early 1600s (they are illiterate and don't know the exact date). St-Jean is a beautiful little inland village straddling a river on the modern-day border of France and Spain, and is almost smack in the middle of Basque Country.

Now, I love the Basques. I could rant all day about the Basques, and never run out of things to say. Originally Hector and Barta were going to be Spanish, but then I realized that there just weren't enough berets, espadrilles, and crazy Basque words in this story (for example, txotxolo--pronounced "cho-cho-lo"--meaning "idiot"). THIS HAD TO BE REMEDIED, AND QUICKLY. So they became Basque. They don't look it, though; Basques have generally dark complexions and coloring, prominent brows and large earlobes. Solution: their mom was Spanish and they inherited her looks. Hurray for cop outs!

Hector is the older twin by ten minutes, and is slightly more introverted. Barta is just a bit taller and more developed, and laughs when Hector gets upset about this (the difference is not noticeable enough for the other members of the Wunderkammer to tell them apart with any accuracy; Theano has the best average at about 65%). They are both relatively easy-going, and excellent cooks (hence the pots and pans in the sketch. Twin #2 is holding a bunch of dried peppers in his left hand, a Basque specialty). Their clothes are somewhat traditional, but tattered and missing some items; they found the Wunderkammer by accident by falling through a hatch on their uncle's sinking ship while fishing for Cod off the coast of Massachusetts. They only speak Basque, a language of about 200,000 words known by less than 3 million people at any given time, and unchanged since before Romans got it into their heads to conquer Gaul.

Ok, some Basque facts. Because I must!

Also, the rebels in Pan's Labyrinth are Basques. Sweet!
Posted by Amelia Onorato at 10:57:00 PM 2 comments: